I came to tweeting reluctantly. I thought it was nonsense, and then, encouraged convincingly by a pal, I began.

It is fun! I find that I tweet about sports and food and the weather, mainly — oh, and bus journeys. Posts from both this horsey one, and my beauty one automatically link to Twitter; you may have even found your way here from there.

It was the first day of Gran Prix jumping at the Olympics. It’s a bank holiday here, and I am staycating, which is super fancy talk to describe my indulgence in the holy trinity of me, my couch, and watchin’ stuff online.

I thought, Ah, sure, one computer is enough, I don’t have to try to work and watch at the same time. Eh, no, need the auxiliary, just so I know who’s up next, and how everybody is doing, and, well, stats. I am fully in touch with my inner dude, and bless him, he’s a bit of a nerd. 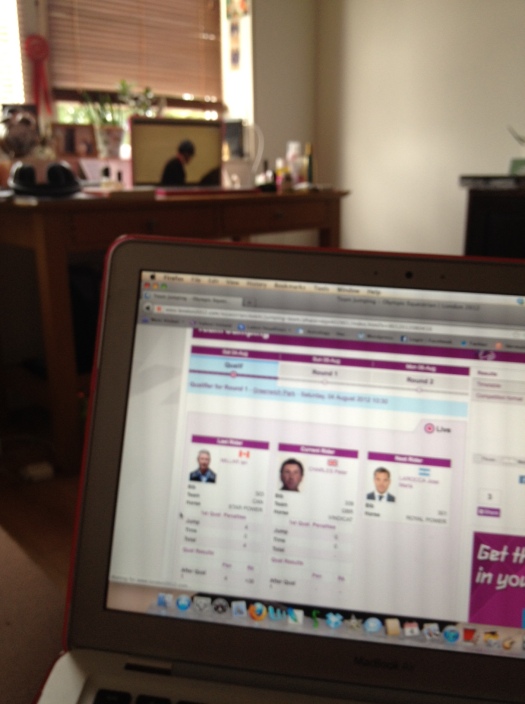 I also was busy tweeting, of course. And most of the tweeters are female, and most of them know what they are talking about. More than I do, because informative tables notwithstanding, I sort of don’t understand how almost everybody can qualify for whatever the next round is, because it looks like almost everybody did. I mean, didn’t you have to qualify for the Olympics in general? Should they not just be taking it from there?

I keep those kind of questions to myself, and will quietly google them later. Because, you know, no need to sound like a dope in front of the whole world. Who wants to do that?

The dudes who tweet stuff like, Shouldn’t the horses be the ones called Olympians, or whatever. I knooooow it is pure make-the-horsey-people-crazy bait, and it all I can do, not to react. Yes, dude, let’s just let the horses jump the course all by themselves, who needs people? I will grant you that those horses are smarter than many humans [AHEM] but I am not entirely convinced that they can read the numbers on the fences. So, they probably wouldn’t be able to tell where to go next. So, riders are actually helpful in this instance.

I went and googled horse jumps entire course by itself and came up with nothing. So there ya go.

I could, of course, simply fail to tweet, but it is fun, and somehow or other, one of my tweets was a top tweet, for like most of the event, and I don’t know why it was, but I was delighted with myself. So there, trolls. I won’t engage with you directly, so don’t waste your characters.

I adore these kinds of exercises. Will I get to try one soon? Who actually knows 😫😫😫😫😫😫Posted @withregram • @phr_jumping_team TOP RIDER &, TOP COACH
Hey @brendiebop it’s just about the one year anniversary of the last time we had jars @mulligans_poolbeg_st 😩😩😩😩😩😩😩😩 Posted @withregram • @typodublin The #typographic treasure trove that is Mulligans of Poolbeg St,
I thought this was diagramme for a jumping course HALP I NEED TO RIDE A HORSE LIKE ASAP KTHXBAI
Ugh — homesick!!! As much as I dislike snow, this peak NYC 😩❄️😩❄️😩❄️😩❄️
Wutttttt CANNOT COPE 🙈🙈🙈🙈🙈🙈🙈 how can this be so cute — I am almost angry at how cute this 😂
Much needed #lockdown3.0

Resident in Ireland for twenty years, Susan E Conley went horse crazy at the tender age of 41 and 11/12ths. In 2006, she finally got up the nerve to get up on an actual horse as opposed to reading and dreaming about them, and it’s been harder and easier than anything she’s ever done yet.
Susan has a Master of Philosophy in Irish Theatre Studies from the Samuel Beckett Centre, Trinity College, an Honours Degree in Psychology, and a diploma in Equine Assisted Therapy and Learning. Conley is the author of three other books: Drama Queen; The Fidelity Project; and the soon-to-be-rereleased That Magic Mischief. She is at work on her next ‘horse book’ as well as a new paranormal/historical romance series.
You can follow Susan on Twitter and Instagram @manybravefools.
Loading Comments...
Comment
×
%d bloggers like this: