A DIRECT AND MEASURABLE RESULT of all this riding: I can haz long boots. 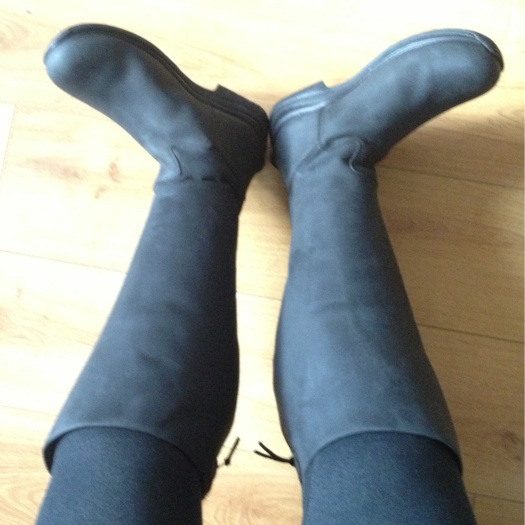 I have had to shop, and very gladly with it, at justchaps.com, because they were the only crowd that catered to folks like me who are not in possession of assembly line calves. They do carry spectacular half chaps adorned with hi-viz stars, so I was happy enough — thrilled, in fact.

But, oh! how I wanted a pair of long boots. I had stopped trying them on as even the wide widths weren’t remotely near to zipping entirely closed, and I shelved the dream.

Only to take it down again when it became apparent that the first round of my chaps, which lasted years, were starting to creep down around my ankles. There was no more velcro left at the top to tighten them any further, and so I dug up a tape measure — no idea where I got one of those from — and came up with a number that that surprised me. I had gone down three categories. Maybe it was time to start looking for long boots once more?

The Dublin Horse Show as near as dammit has it all, and I wandered the shopping halls, searching for my long boots. Some of the boots on display were thinner than my feckin’ arm, and I kept walking. These ones were also amongst the most expensive. Funny how that works.

I’ve lost track of the number of vendors who knelt at my feet, yanking up zippers, and I was ready to give up. I bought a new pair of newly smaller neoprene chaps, and then wandered into the Holmestead stand. I had eyeballed a pair of Toggi Calgary boots on the Wednesday, and I don’t why I didn’t try them on then. No matter. One more beleaguered shop worker — God bless her — down on the ground, patiently insistent that the zips would close —

AND THEY DID. I bought them in a haze of delirium and panic — they were only €109, but I had only recently come through a tough financial year and one hundred euro was as much as one thousand, in my mind; I was wearing leggings, not jodhs, and it was tough enough to close them — but sure, they were leather, they would stretch, and these seemed so well made, they’d last me ages; even if they lasted only three years, prorated at only €36.33/year, that was a bargain! [<< WUT? Well, it make sense to me.]

I wore them round the house for a couple of days, ordered a long boot bag, sprayed them with leather protectant, and when I took them out for the first time, couldn’t believe how vital my ankles are, in the big scheme of things. The initial jumps in the lesson were not the prettiest, but we got there in the end. The soles are that tiny bit thicker than I usually prefer, but I’m getting used to that too.

All in all, I am so delighted to be wearing them, and fingers crossed, am looking at a winter with far less frozen feet. 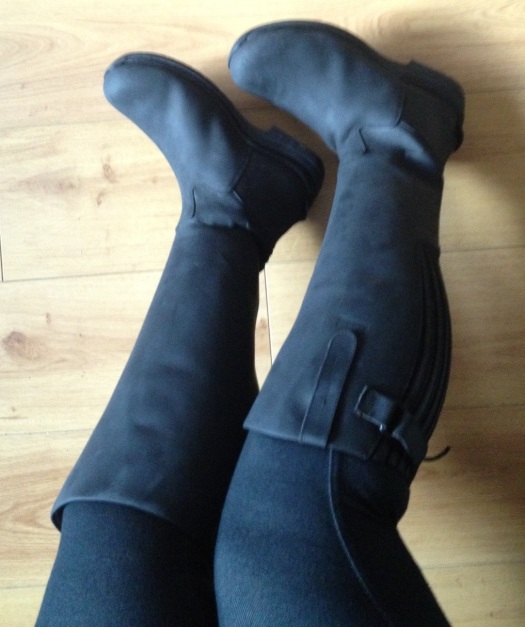 Coming to Reels near you or maybe even TikTok 🤔 Adventures In Baking with Susanna Allen in honour of the imminent book blog tour for That Magic Mischief #romance #paranormal #blogtour #baking SPOILER ALERT: I hate baking. !!!
Ahead of getting pre-release ready for A Most Unusual Duke (28 December! Available for preorder!) I joined a virtual queue* to book a digital ticket for the streaming of The Scottish Play #amostunusualduke #regency #regencyromance #shapeshifters #bear #duke #HEA #novel #historical #paranormal #romance 🐻Arthur, Duke of Osborn, is a massive fan of theatre in general and Shakespeare in particular. *By virtual queue I mean it was an actual queue only in the internet. I had a number and a wait time and they emailed me when it was my turn. O brave new world that has such techo in it…
That Magic Mischief is available now!
Not even close to what’s happening out there today 😂 This light is gorgeous, but depending on which arena my lesson is in, can prove pesky, shining in the rider’s eyes and reducing visibility #horses #horsesofinstagram #horsebackriding I’ve had lessons in all aspects of postman weather and am obsessed with my weather app. It’s where #thehorsingforecast came from: always got an eye on the sky!
My goal going forward is for Sundays to be Costume Drama Night, and I’ve had this one for over a week and haven’t fired it up yet #romance #costumedrama I think—weirdly—it’s because I love it so much, I do t think I could bear if it didn’t hold up 😭😭😭 Looking for recs for future CDNs, have you got a fave? #movies #movienight🎬
Fionn got his winter clip and yet did not go mad with the fresh air on his skin 😂😂😂 He was fab on the flat, so easy to ride without stirrups, and gave me beautiful cantering leg yields even when the one on the right rein came off an awful turn from me #horses #horsesofinstagram #ridinglesson #horsebackriding ❤️❤️❤️

Resident in Ireland for twenty years, Susan E Conley went horse crazy at the tender age of 41 and 11/12ths. In 2006, she finally got up the nerve to get up on an actual horse as opposed to reading and dreaming about them, and it’s been harder and easier than anything she’s ever done yet.
Susan has a Master of Philosophy in Irish Theatre Studies from the Samuel Beckett Centre, Trinity College, an Honours Degree in Psychology, and a diploma in Equine Assisted Therapy and Learning. Conley is the author of three other books: Drama Queen; The Fidelity Project; and the soon-to-be-rereleased That Magic Mischief. She is at work on her next ‘horse book’ as well as a new paranormal/historical romance series.
You can follow Susan on Twitter and Instagram @manybravefools.
Loading Comments...
%d bloggers like this: