It’s not like I had the money to spend, but nevertheless: at the Dublin Horse Show, I went and tried on some new gear.

I am trying to remember when I got the John Lewis yoke that I’ve been using… I’d say maybe three years ago, at least? Getting used to being sandwiched in that thing, that big blue thing, took ages. But I’d had a pretty hard fall off of Amigo, and when I went to my physio for my routine appointment two weeks later, I told him I’d fallen and that it was still sore, up around where the bra hooks are. He checked it and said, Yeah, you’ve got a vertabrae a little out of whack, and I said out loud, Oh, right; I said to myself, in loud: ohholycraaaaaaaap.

It was time to woman up and start wearing protection; clearly, it was past time. I had officially gone up a notch {a centimeter, a millimetre} in my riding, and yeah, okay, should have been wearing one already, but now I was, and once I sweat the stiffness out of it, it was fine. As bulky and awkward and unattractive as it was, once the lesson began, I generally forgot all about it.

In the last year or so, I’ve been tightening it and tightening it, pulling the velcro closures closer together, shortening and shortening the straps. Looks like I’ve lost some weight, and the new one I wanted to get, the jockey-ish one that zips up the front, eh, it was still a bit pinchy under the ribs. I googled a bunch, and immediately fell in deep desire with the Airowear Outlyne, because it takes into account that the ladies have different requirements — ladies have breasts, and this piece of design excellence takes that [them?] into account.

I totally didn’t understand the sizing chart, and you had to measure everything: chest, waist, over the top of the torso, God knows. I put it out of my mind, because I didn’t want to buy it online and have it be the wrong thing. I wasn’t going to wear an important piece of equipment without it fitting properly.

Then I went to the horse show, and thought, Well, you know, I’ll just try some on. Why not? It’s no big deal.

Here is the Champion FlexiAir in black. It was jammers in Holmestead’s stand, and I took down a sample in Adult Large myself. I felt like this would probably be okay, since my present one is an Adult XL, and if it’s getting too big… I strapped myself in and it fit, mostly. Something felt wrong. I wiggled it around, and readjusted the waist strap, but it didn’t seem to be sitting correctly.

One of the ladies became free. This feels wrong? I said, really not certain how I knew that. I mean, all the closures closed, so… It’s too long, the lady replied briskly.

She fit me in one with a regular back, and pulled the straps even tighter. I liked it fine, it seemed a little loose around the shoulders, which would probably settle in time… but I wasn’t in love, much less lust.

Falling in love/lust at the Dublin Horse Show is the work of a minute. There is: So. Much. Stuff. Brushes, whips, gloves, half chaps, and booooooots, the long boooooots. If I think that the BPs are expensive, the boots are like, I don’t know, buying yourself a private tropical island. I don’t need long boots right now, and if I did, I’d have to get them specially made as my calves are not assembly line dimensions. This is totally cool, and I actually tried on a pair of winter weight mucking boots that mostly fit, but with long boots — long boots can’t ‘mostly fit’.

Ah, sure, I didn’t really like those muckers that much. Got nothing to muck, in fairness, anyway!

And then… and then. Pitched up to the Ayr Equestrian stand in Simmonscourt and there it was. The Airowear. I… I touched one, the one in the front, that looked vaguely like an adult size. I stood there and kept staring at it, like a, like a stalker, until one of the ladies asked me, would I like to be fitted for one?

The fitting-man eventually became free, and picked up the very one I had been gazing at. He started talking, but I barely heard what he said after he said, This is a ladies slim — sorry, a what? A slim? He fussed with straps and adjusted panels, and then told me to zip it up. 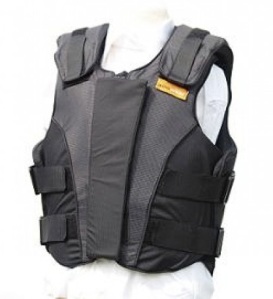 Oh. Ohhhhhhhhhh. OMG. It fit like it was made for me, personally tailored. It cinched up the boobage completely yet comfortably. I went to sit down to check the length of the back — perfect. It sparkled in the sunlight, it glowed as I admired it in the full-length mirror. I swear, it is shiny, it just doesn’t look that way in the photo {I swear!} Yer man kept saying over and over, It adjusts to your shape, can you feel it? It adjusts to your shape, and it was all I could do stop myself telling him to leave us alone, me and this astoundingly supportive and well-fitting body protector. Leave me! I yearned to shriek. Leave us in peace!

It felt… so strong. It made me stand up straighter, it fit perfectly over my shoulders and down around my back. And yet it felt light, too! It was amazing!

And then your man did the sterling-to-euros conversion, and I reluctantly, but decisively, drew down the zipper and handed it back.

I asked him twice more: Ladies slim regular? Slim? Ladies? After he walked away, and I waited for my pal who was trying on jodhs, I kept going back to look at the tags. Ladies Slim Regular. Huh.

I spent the rest of the day thinking about it. Knowing better than to borrow against future expectations, I tried to put it out of my mind… but I would occasionally blurt something like, Well, at least I know what fits, now; and Christmas is coming. And: If only is wasn’t rent week! But, no, no: this is a thing that can wait.

In other news, the Irish showjumping team won the FEI Nations Cup, which was fantastic!

It took my mind off that body protector, anyway.

The one I have is fine. It still fits, it’s still safe, all is well, it’s grand. Seriously, Christmas is coming!

One Reply to “Fifty Shades of Neigh: Body Protector Lust”

The Autumn Equinox, that is, here in the northern hemisphere. Happy spring equinox to any and all of my followers who enjoy a right-to-left trajectory of the sun! 🍂🌸🍂🌸🍂
Well here’s a turn up for the books #LOL delighted that all three books I entered in the 2022 NYC Big Book Awards placed as Distinguished Favorites #2022NYCBBA , #BigBookAward and #GabbyBookAwards 📚🗽🏅Link to my website is in my bio if any of these spark your interest ☺️
A great cause and a gorgeous print! Subject matter, of course, will come as no surprise to those who follow me. Follow and support @printsforwildlife @africanparksnetwork as they continue to raise money for the purpose of conserving 30 million hectares of African land in aid of both people and wildlife ❤️
THANK YOU @ververomance 😱😱😱 It’s the kind of review every writer dreams of, and not just because it’s positive, but because you can tell how much the writer loves books and reading 💕💕💕 LINK is in my Story! 🦁🦁Thanks Beth, and Julie: sorry you lost your reading buddy! Hope you get a chance to catch up 😂 A DUKE AT THE DOOR 🦁🎩👩🏻🌿🥀⚓️🛳 #lion #duke #HEA #regency #novel #historical #paranormal #romance
Thanks for reading!! 🦁💕🦁 Posted @withrepost • @book_review_crew A DUKE AT THE DOOR, Shapeshifters of the Beau Monde Book 3
Random! When I took my first photography class at Pratt in 19mumblemumble, the teacher commented that I had a habit (good or bad? Who knows?) of framing within the frame, of looking through something to something else. Still at it! I wonder if that shows up in my writing… 🤔

Resident in Ireland for twenty years, Susan E Conley went horse crazy at the tender age of 41 and 11/12ths. In 2006, she finally got up the nerve to get up on an actual horse as opposed to reading and dreaming about them, and it’s been harder and easier than anything she’s ever done yet.
Susan has a Master of Philosophy in Irish Theatre Studies from the Samuel Beckett Centre, Trinity College, an Honours Degree in Psychology, and a diploma in Equine Assisted Therapy and Learning. Conley is the author of three other books: Drama Queen; The Fidelity Project; and the soon-to-be-rereleased That Magic Mischief. She is at work on her next ‘horse book’ as well as a new paranormal/historical romance series.
You can follow Susan on Twitter and Instagram @manybravefools.
Loading Comments...
%d bloggers like this: