I woke up and thought, Wouldn’t it be nice to just lie here and daydream about going double clear over the 80s on Connell?

This is the thing that makes people not do what they say they’re going to do: it is nice to just lounge around and make up the story, the perfect story, about the thing you want to do, because it always works out, er, perfectly. As a writer, I find this to be the hardest part about getting anything of length produced. I have these really excellent scenes, right, bits and pieces that do have a sequence and a narrative drive, but it’s the linking bits, the other bits and pieces that threaten to make the thing never happen, because, well, they are the nuts and bolts.

You gotta be handy with the nuts and bolts, or the whole thing collapses.

I got up anyway, and commenced conjuring up positive images in my mind. On Tuesday, Connell and I jumped really, really well, and on Saturday, whilst the fences were teeny, we had to jump a grid and then a twenty metre circle over to jump at X, and then another circle to jump at M, and we managed it better every time we did it, so I was feeling pretty good.

Also: nervous. I mean, 80s*. If I hadn’t gotten Con over more than four fences without incident in the past, well, that had demon had been exorcised — but only over 70s.

But I could do it. I was pretty sure. Yeah. Okay.

We walked the course as it was being set up, and unwisely, as it transpires, rolled our eyes a bit. It certainly didn’t look as tricky as the one from last week. That dogleg at B looked a bit funky, and geez, there was so much time between the first fence at F and the second at H. What was that about?

We watched some of the riders, and something funny seemed to be happening, in that no one was going clear. Well, one girl did, the one who went first, but after that it seemed like about halfway through, or just at the very end, it all fell apart.

Enough of that! Off to find Con, who had been in the lesson previous to the first round of jumping, which was either a good thing or a bad thing. He wasn’t in his own stable, and when I found him, he was halfway through what was most likely someone else’s lunch. Hmm. He wasn’t going to thank me for that.

Into the indoor to warm up, and there were way more people than there was last week, and I got a taste of what it must be like to jump at Kill or in the RDS: horses and riders all over the gaff, jumping off either rein, and standing around chatting and cutting off your approach. I started to get a little bit psyched out. I took a few terrible goes, he wasn’t giving me the right canter depart, and the left wasn’t much better. I allowed myself to get annoyed about the traffic; I knew this was just a cover for the nerves that were starting to twitch.

Now, last week, the course changed for the 80s: not in configuration of the whole, and not only in the height of the fences, but as regarded individual fences, and the sequence of the fences jumped if one went clear the first time round. I walked in on Connell and got a look at the number 6 fence. Oh, crap I thought.

‘Did you just say “Oh, crap,” Sue?’ someone called from the ground.

I guess I had said it aloud. Number 6 was a cross. Not a crosspole, but an X, made out of four wings and two poles, and if you hit it correctly, it wasn’t really that big a deal, because the point where the poles cross is nothing much. I flashed back to the only other time I jumped Connell over a fence like this, the time he jumped and then STOPPED so that he straddled the thing, and I hit the dirt.

Ooh, sticky, I thought as I struggled to get Con to strike off correctly. At least I am getting better at feeling it. The fences seemed — well, they were high, but they didn’t seem unmanageable. We took 1 — he had bucked and squealed as we headed for it, there was a bit of hesitation as we took it, so I used all that time between 1 and 2 to get our rhythm to improve.

… which was grand, it felt a bit late, but it looks okay here, and then ideally three strides to 4:

… which was a honking yellow monstrosity of an oxer. We got four strides, but over we went, and given Con’s usual dislike of spreads, I was as delighted as I am able to feel when I am focused on a course.

The green-and-whites are a double, one stride between, and this went really well, we got the stride perfectly. I almost psyched myself out here, because the fences looked higher than 80 to me**, and I had adjusted my brain to 80, so if that looked like 85, then I could conceivably misjudge it or whatever — but that is not my job, my job is to direct properly and sustain the rhythm. Anyway, it takes less time for us to jump that double than it does for me to tangle up my thinking, so whatever.

Hey, look at me, looking where I am going! 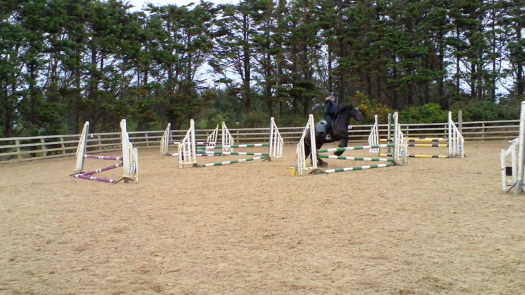 That scary auld cross-thingie at 6? La la la, easy peasy lemon squeezy — and then I almost missed 7 because the the little sign was down, over to 8, and holy crap! Clear first round!

Connell wouldn’t pull up. I couldn’t get him on the correct lead. We went all the way down the arena, then I got him going, then he changed leads on me — thanks, dude — then I got it back, then we came around, he hesitated before 3, Shite, I thought, then he bucked halfway to 4, I tapped him up, and over we went — but he knocked the poles, argh! and then I headed to 5 — and then when I landed I was like Wait a minute —

And then I was eliminated. I honestly didn’t know what I was doing after 4, and then when I landed after 5, I was like Hmm, okay, that wasn’t right.

Well, that was a little bummer, but not a massive one. The first round, that went mainly really well. I got him round even though he didn’t really want to go, and I got loads of great feedback from everyone about that, because Con does have a bit of a rep for not wanting to go, and for being slow. That first round, I am proud of it.

I learned the following:
> I can jump 80s on Connell!
> I know when he is being sticky.
> Don’t rush into the second round! I can take my time! I can ask what I have to do before I attempt it! [And if Paul won’t say, one of my pals will shout it from the sidelines.]

That last one is the most important. I was so focused on trying to get him to do the immediate thing, I didn’t think ahead. In fact, as shown, I clearly wasn’t even thinking about where I was going, just on getting him going. Hmm. That’s good. Okay.

What I meant last week came good: that it wouldn’t matter now if I didn’t get a rosette every single time. I’m into the nuts and bolts now, into riding more independently than I have yet, and now I see that while the height is an issue, it’s only one of many that need to be managed. It’s not only about how high you jump, but also about how smoothly, about how you remember where you are going, how you work with the horse to do all of this whilst minding yourself as well, which means keeping a good contact, keeping the leg on, keeping the weight in the outside stirrup, folding, going with the horse over the fence…

Can’t wait ’til next week!

*80cms = 2′ 8″
**They are absolutely not higher, I can see it from the picture. Sheesh. But: amazing what the mind will do when allowed to start making up stories…

Resident in Ireland for twenty years, Susan E Conley went horse crazy at the tender age of 41 and 11/12ths. In 2006, she finally got up the nerve to get up on an actual horse as opposed to reading and dreaming about them, and it’s been harder and easier than anything she’s ever done yet.
Susan has a Master of Philosophy in Irish Theatre Studies from the Samuel Beckett Centre, Trinity College, an Honours Degree in Psychology, and a diploma in Equine Assisted Therapy and Learning. Conley is the author of three other books: Drama Queen; The Fidelity Project; and the soon-to-be-rereleased That Magic Mischief. She is at work on her next ‘horse book’ as well as a new paranormal/historical romance series.
You can follow Susan on Twitter and Instagram @manybravefools.
%d bloggers like this: