The morning was cold, colder than we’d had the last two days, cold enough to see my breath. I felt achy, and annoyed that I hadn’t brought the antihistamines that had fallen off a shelf in my bathroom whilst I was packing. I sat in the back of the van and closed my eyes.

We were heading for the seaside village of Matalascanas, where we would trek through the Donana Natural Park down to the beach for a canter or two.

What is it about cantering on the beach? When anybody asked me what I’d be doing on this trip, when I mentioned that, it was generally received with a chorus of sighs. There’s something cinematic about it, I suppose, something larger than life, and definitely something freer than going round and round an arena. I like going round and round an arena [I realise I’m working out my control issues through dressage, but that’s for another post], but I, too, had my imagination fully captured by the notion of pounding down the beach on horseback.

I wasn’t sure, once we got started, that I was going to have much joy. I got on a horse, whose name I wasn’t told, from the ground, basically heaved up by the guy by just one of his hands under my nearside, stirruped foot [it was pretty wild, one minute I was cursing myself for not having learned the Spanish for ‘mounting block’, the next I was up in the saddle] and from the start I could tell this horse wasn’t going to be the faster meteor in the galaxy.

At one stage, I forgot I was on a holiday and stated to get worried about being fast enough, being good enough, all that useless kind of crap that, even on bad days, days of struggle, horseriding manages to eradicate in my make up. I was thinking too much, and I hated directions to make him— whoever he was, I hated that, too, not knowing his name— go, and I hated banging away at him when he was clearly just a tourist trail horse, inured to the work and perhaps annoyed by it.

But the journey was beautiful, nevertheless. I think I’ll let the pictures do the talking. 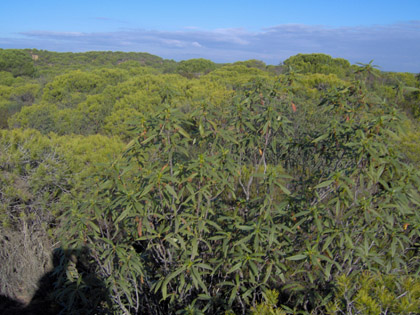 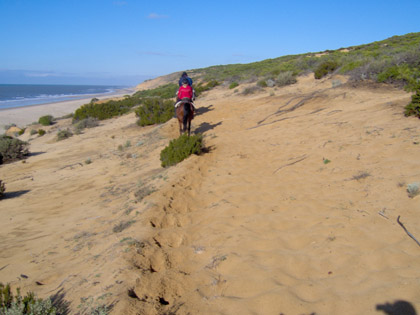 This picture directly above demonstrates how far we lagged behind the first three riders.

But, in fairness, all these pictures were taken from the back of my poor plodder, so that’s something.

We were the only ones on the beach. We were the only ones who could have gotten there! The waves rolled in, gently, and my horse seemed to square his shoulders, and he definitely lifted his feet— this part was a-okay with him. I had one hand on the reins, the other tucked behind me: it was my first time in a Western saddle, and it felt like a big, cushy armchair. Both hands took the reins, though, once we took off, and it was… spectacular. It truly was. Miles of unpopulated coast was ours as we flew down the sand, fanned out across like The Magnificent Seven [er, if they had been on a beach in Spain], simply flying as the sun sparkled on the sea.

It went too quickly. And the journey back went as slowly as before, and after some gentle encouragement from one of the other riders, I let my guy just make his own way, at his own pace. I had asked the ride leader the horse’s name, except I think in truth I had asked the man his own name, and the Polish woman had to intervene, so whether or not Hitando was actually what he was called is anyone’s guess.

All in all, an excellent day, really, and here’s my favourite shot of the trip. I like to call it Self Portrait on Horseback, Sombra.

I’ve taken a wee break from a WIP to poke at a story set in my Regency shapeshifters world, and between figuring out plot (ugh)(vibes only, why nottt) and making a really fun decision regarding the central character, I was all over the place about setting.
I immediately thought, surely I have a rabbit in the world of the Shapeshifters of the Beau Monde 🤔 Well, had to go wayyyyyy back in the drafts to find that the versipellis Felicity’s stable manager fell in love with was a rabbit. So happy lunar new year and year of the rabbit 🎊🌚🎊🐰🎊 #wolf #alpha #romance #HEA #regency #novel #historical #paranormal #PNR #romance
Just spent a very satisfying half an hour (at most) registering all my books in the British Library’s UK and Ireland Public Lending Right scheme.
Thanks for the mention! ❤️❤️❤️ Posted @withrepost • @romantic_pursuing_feels 🥰 2022 I was able to try so many new to me authors - 39!
It’s one year since A MOST UNUSUAL DUKE debuted. An abiding memory — apart from having finished it during the first round of the pandemic — was that about halfway through, I realised that my FMC’s name needed to change.
See susannaallenwriter.com for 🛒 links! #regency #romance #shapeshifters #bear #duke #HEA #PNR #novel #historical #paranormal #sourcebookscasa #bookstagram #bookfluencers

Resident in Ireland for twenty years, Susan E Conley went horse crazy at the tender age of 41 and 11/12ths. In 2006, she finally got up the nerve to get up on an actual horse as opposed to reading and dreaming about them, and it’s been harder and easier than anything she’s ever done yet.
Susan has a Master of Philosophy in Irish Theatre Studies from the Samuel Beckett Centre, Trinity College, an Honours Degree in Psychology, and a diploma in Equine Assisted Therapy and Learning. Conley is the author of three other books: Drama Queen; The Fidelity Project; and the soon-to-be-rereleased That Magic Mischief. She is at work on her next ‘horse book’ as well as a new paranormal/historical romance series.
You can follow Susan on Twitter and Instagram @manybravefools.
%d bloggers like this: